Did you know that you can navigate the posts by swiping left and right?

In this post we will talk about how and what needs to be signed to prove ownership of funds residing in specific addresses. The tutorial assumes high-level understanding of Bitcoin and at least having gone through the previous technical articles of this tutorial.

When we create a new transaction we need to provide a signature for each UTXO that we want to spent. For a P2PKH UTXO the signature proves:

The digital signature algorithm used is ECDSA and each signature is serialized using DER. There are different ways to sign inputs of a transaction so as to provide different commitments. For example: “I agree to spend this input and sign it as long as no one can change the outputs I specified”. To specify these commitments, i.e. which parts of the transaction will be signed, we add a special 1 byte flag called SIGHASH at the end of the DER signature.

Each transaction input needs to be signed separately from others. Parts of the new transaction will be hashed to create a digest and the digest is what is signed and included in the unlocking script. To determine which parts are hashed the following rules are followed:

The possible SIGHASH flags, values and meaning are: 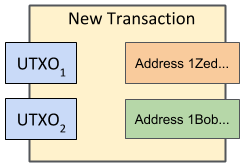 For an example of SINGLE, consider creating the transaction shown above. Alice needs to pay 1.5 bitcoins to Zed and they agreed with Bob that he will contribute 0.5 of that amount. Then Alice creates a transaction with two inputs, UTXO1 that she owns (with 1 BTC) and UTXO2 that Bob owns (with 1 BTC) and a single output that sends 1.5 bitcoins to Zed. She signed UTXO1 with SIGHASH SINGLE and sends the incomplete transaction to Bob. Bob cannot choose a UTXO other than UTXO2 since it will invalidate Alice’s signature of UTXO1. However, he is free to add other outputs so he creates an output that sends the remaining bitcoins (he agreed to pay only 0.5) to one of his addresses. He can then sign UTXO2 with SIGHASH ALL which will effectively finalize the transaction2.